This was a concept project that began at Spotify office, NY Monthly Music hackathon August 2017. The theme for the day was Music Education and accessibility. Me and my friends came up with GrooveGyan.

The idea was that grooves are described as “an unspecifiable but ordered sense of something that is sustained in a distinctive, regular and attractive way, working to draw the listener in.” [The New Grove Dictionary of Jazz, 2nd ed. (Grove Music Online). Oxford Music Online. Retrieved 16 October 2015.]

So how about a multimodal groove that exists in a) Sound, b) Light and c) Vibrations.

We created an app, that enabled the user to create a repetition pattern within a bar in all 3 domains. This then gets stored as a groove in the database. Another user could get scored on practicing a recorded groove. Grooves are built by repetition of accents as

a) Sound – like a drum pad of couple of sounds

b) Lights – like a pad where each trigger, flashes different colored lights.

c) Vibration – a pad where pressing a button makes a short pulse vibration. (maybe vibrations of different intensities if the device allows it)

Most grooves are based on a call and response of multiple sounds (bass, snare, toms), dividing time in different groups.

This app could be a useful tool for not just learning new types of grooves across the world. (Quintuplets, septuplets, in indian rhythms, swinging grooves etc) but also a new way to make multimodal grooves making the concept of rhythms and groups accessible to people with hearing difficulties.

Here are some screenshots of the app under development 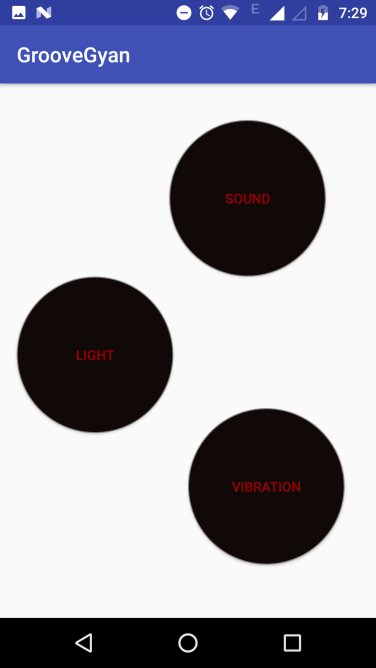 Scoring could be done with a real time color coded green/red indicating rushing or lagging. One could even see the statistics of performance at the end and learn about their unique tendencies.

[Work in Progress: Will update code for the project as an open source git repo]

View all posts by eardrummerman